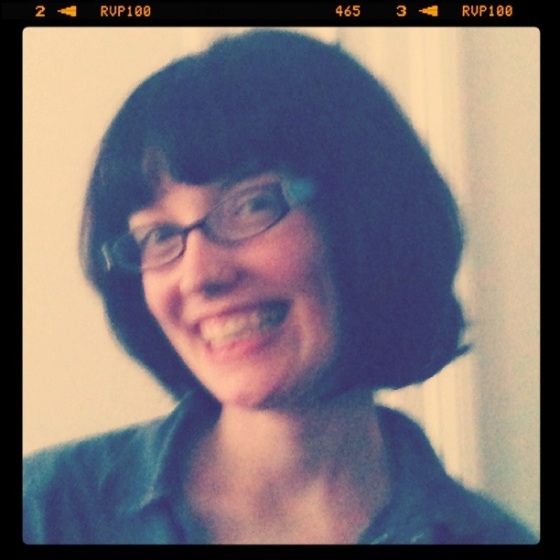 How do you define feminism?
Feminism is the acknowledgment that women, as a group, around the world, face
specific obstacles to success, health, happiness, freedom, because we are women. I
find that when people acknowledge that this is true, they are more willing make
changes. Feminism is making the changes that eliminate unnecessary suffering,
whether that’s providing better medical care to women during and after childbirth
or simply making sure that women receive equal pay for equal work. I don’t care
about blaming anyone, unless removing someone or some entity from power is a
necessary step; I just care about fixing it.

When did you first identify as a feminist?
I have a very cool older sister, and when she went to college, she taught me about
feminism. I was about six years old when she left home, so I guess it was in early
elementary school. But I don’t remember a time when I didn’t identify as a
feminist!

Has your (definition of) feminism changed over time? How?
My definition of feminism really crystalized when I started working with little
kids full time; we spend all this time explaining to three- and four-year-olds that
different people like different things. We tell them that it’s ok to like different
things and that it’s mean to tease your friend because she likes pink or doesn’t like
pink. It’s a cliche, but that saying that “Feminism is the radical notion that women
are people, too”–I keep coming back to that. We must treat people with respect
because that’s what is right and that’s what we want for ourselves. In order to see
how we can make things better, we need to see differences and ask questions like
“Does she earn less because she is a woman?”

I went through an angry phase in high school (for many reasons beyond the
“typical” teenage angst) and I became very interested in the men and women who
were “keeping us down.” At this point, though, I’d much rather have compassion
and empathy during a conversation with someone who doesn’t see that feminism is
necessary. Empathy works better than anything else I’ve found when it comes to
children; it can’t hurt with adults! It’s a lot easier to follow through with a child,
but with practice, I’m getting better at it with grown-ups, too.

Have you ever experienced resistance to identifying as a feminist? If so, why do you think that is and how do you handle it?
Every time I hear a woman say “I’m not a feminist, but…” it strengthens my own
determination to wear the label with pride. And it always has. A boy in high
school once called me “feminist” in a tone usually reserved for curse words. I told
him “Yes. And?” Resistance to equality for women made no sense to me then, and
it makes no sense to me now.

What do you see as the future of feminism?
I see my own feminist future as a very personal project. Sticking it out during a
conversation with a conservative Catholic relative until she understands why I
believe Planned Parenthood provides necessary medical care to underserved
populations. Asking a preschooler why he thinks nail polish is only for girls and
giving him the option of wearing some if he feels like it. Sending my four-year-old
niece a magenta t-shirt that says “Pretty’s Got Nothing to Do With It” because we
want to remind people to talk to her about the amazing things she does instead of
just how she looks. Speaking up about my own experiences with anxiety and
depression, mental illnesses that are more likely to haunt women. Joining online
communities that encourage women like me to use our voices. Making feminist
choices every day, even if that’s just refusing to agree that my husband doing the
cooking is “odd.” Raising a child of my own who takes responsibility for the world
we’ve inherited and for changing that world.

Anne-Marie has made some drastic moves in her life: from a childhood in rural Minnesota
(lots of trees, deer, lakes, very cold winters) to Barnard College (Columbia
University) in New York City. From a PhD program in English Literature/British
Modernism to a career as a child care provider. From a dark time as a psychiatric
inpatient to her current project: preparing for a pregnancy of her own. She now uses
her talent/penchant for writing to blog about women’s mental health surrounding
pregnancy and motherhood (as well as childcare, parenting and life in general) at
Do Not Faint.

One thought on “This Is What A Feminist Looks Like: Anne-Marie”