Yesterday afternoon, I stumbled across a Twitter chat held by Women in the World. Hosted by noted feminist (and mother) Jessica Valenti, they tackled the topic of “Modern Motherhood.” The questions posed were thought provoking, and the ensuing discussion (which I followed via their hashtag, #wiwchat ) was enlightening. It was also a welcome change to see motherhood discussed in a way that didn’t reek of judgment and competition.

For those who didn’t have a chance to check out the chat, I’ve included the questions below (in bold) and my own answers in teal (expanded upon the ones I shared via Twitter) below.

Q1 How has pop culture, media, politics (or policies?) shaped our idealized notions of motherhood?

I joined the chat after the 1st few questions had been posted, so I didn’t have a chance to respond to this one via Twitter, but I doubt I could have accomplished that in only 140 characters if I tried.

We’re in an age of media where you can’t escape varying views on motherhood. Movies, television, magazines, advertisements, books, and the vast assortment of online offerings (from websites to blogs to even Facebook) all attempt to mold this concept of motherhood. But the problem (in my view) is that there is no one right way to be a mother. This doesn’t stop folks from promoting the myth of the good mother, however.

There’s an idealized notion of motherhood – one that meshes the traditional Donna Reed-esque mother of the ’50s with a more liberated “working girl” modern woman. The “perfect” mother should have all these qualities (and more!). She should be able to be up early with a smile on her face, get the kids fed, dressed and off to school before glamming herself up for her job. Somewhere in the middle, the house is spotless, the husband is happy (because supposedly that is her job too), the dog is fed/walked, the kids are shuttled to numerous activities, dinner is made, cookies are baked, and a blog all about her day is written before she slips into a sound sleep.

This ideal is unattainable, but the media (in all it’s various forms) continues to promote it like folks aren’t fed up with these unrealistic expectations. And while we can joke about these idealized concepts of motherhood, we also need to realize that these notions can have negative effects – from postpartum depression to exhaustion to resentment.

Q2 Can working mothers really ‘have it all,’ and how do you balance work and family life?

The have-it-all concept only sets women up to fail, mostly because not everyone has the same definition of having it all. Beyond that, we are just not in a society that supports women having it all, which makes that concept extremely difficult to attain.

Perhaps once our government overhauls maternity/paternity leave policies, works to combat/educate folks about PPD, provides quality affordable childcare, etc… then, maybe, we can discuss exactly what it means to have it all. Because currently, when there are families where working isn’t a choice, but rather it’s a requirement for both parents, then we can’t fairly pose this question.

Sure there are certainly ways to attempt success both in work and home, but a lot of it requires support. If you have friends and family at your disposal then you may “luck out” – otherwise, you end up having to pay for your support, and then we’re back to square one of who can afford it.

Also…why doesn’t anyone ever ask working fathers how they manage to “have it all?”

Q3 Caitlin Flanagan has argued that something is lost when a woman works outside the home? Do you agree?

I feel that mothers and fathers need to make the best choices for their own families. I think there are pros and cons to having parents work/not work. But to say that something is lost when a woman works outside the home without offering any solution is just unhelpful and further stirs the mommy wars pot.

Q4 What’s the one ‘reality’ of motherhood you’d share with a new mom–and would most mothers be surprised by it or not?

That it’s ever changing. That even when you think you’ve got a handle on things – and have found the perfect solution – that will change too. But that it’s okay.

Also – that motherhood isn’t a “one size fits all.”

Q5 Should child care be a private decision (U.S. style) or should we treat it like a public good (Norway style)? 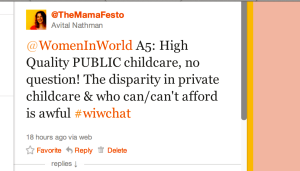 Public all the way. But that’s not enough – it has to be high quality public child care. Most parents are working just to pay for their kid’s childcare and it becomes a wash. The cost of decent child care in this country is astronomical. If you want to ensure you have productive employees who do their best, we – as a country – need to figure out a way to offer quality care for children so parents don’t need to worry about it. If other countries have successfully provided for their children – why can’t the US?

Q6 Has motherhood changed your view of feminism? 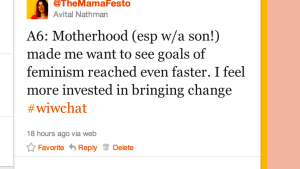 Certainly. It became less about how feminism impacts me, and how my feminism can work to impact the rest of the world. I became a little less selfish and a lot more motivated to change things for the better. I had big plans when I was pregnant, thinking I’d have a little girl to stand by my side and fight the good fight with. Those plans got thrown for a curve ball when I had my son, but to be honest they didn’t much change. I still want him to grow up in a world where equality reigns, and where people aren’t prejudged based on their gender.

I really could write essay answers for each of these questions, but I’ll stop here for now. Hopefully the discussion continues, because all of these questions sparked important points and hope for change. So…what say you? How would you respond to these questions? Share your thoughts below…in 140 characters or less!
(And don’t forget to check out Twitter next week when Women In the World host another chat!)