We’re a gaming family. Not so much the video kind (although we’ve been known to get our Mario Kart on), but more so of the board persuasion. Both MD and I played board games growing up, and we started our own substantial collection when we got together.

When EZ turned 4, we started getting him in on the action. We started with Chutes & Ladders and Candy Land, and soon he was addicted as well. Every so often we’ll add a new one to our collection, and they are usually child-friendly. This past weekend we picked up both Operation and Guess Who. Operation has changed a bit…there’s no longer a bread basket or butterflies in the tummy (instead there’s “cellphone wrist” and neon green boogers…both of which I’m sure we’ll lose in the next week or two, as is par for the course with any tiny game piece).

Then there’s Guess Who. I loved that game as a kid, and was super excited to play with EZ. But I have to say, once we set it up and got started I was shocked. Out of 25 characters to choose from, only 5 are women. That couldn’t be right, I thought, and rushed to see what the original game had…

It also only had 5 (It was also extremely white-washed. The current version is a bit more colorful). And then it all came rushing back to me. Whenever I played as a kid, I hardly ever picked the girls. Why? Because when you’re as calculating and competitive as I am, you knew that the odds would never be in your favor if you chose a girl. She’d be guessed in less than 3 questions. 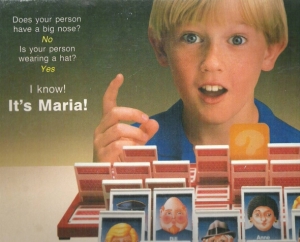 Yeah, I can't get excited over a victory that is basically handed to you on a sexist platter.

And you know what? EZ is picking up on that now. He hardly picks a female character because he knows that I’ll be able to guess it in a couple of questions. We’ve mostly stuck to the animal side of the board (where this is almost an even ratio of cat:dog, mind you), and I’m trying to figure out if we can somehow create our own board to use.

I could get all angry and up in arms over how Guess Who is a totally sexist game, but really, instead of being shocked and angry, I have to admit, when this all sank in, I was more disappointed than anything else. I doubt it was a conscious choice on the part of Hasbro to only include 5 women in the game. In fact, that’s the problem…Nobody thought about it.

It’s part of a larger, systemic issue, one that is perfectly laid out for us with the latest drama surrounding LEGO’s new girl line.  LEGO continues to claim that their research has shown that girls just don’t like their gender neutral sets, and the company won’t back down from promoting their new LEGO Friends girl line, no matter how upset customers are. But the problem goes beyond LEGO Friends.

Pigtail Pals recently posted a picture from LEGOLand, showing a LEGO female firefighter (yay!) putting on lipstick (WTF?). Nobody from LEGO corporate (or any park employee) took a second to think about why that could be off putting and completely sexist? I have nothing against wearing make up, but to portray a woman as a firefighter, and then to rely on tired stereotypes to complete the piece seems like poor form to me.

But should we be so surprised when the management team for LEGO is compromised solely of older white men? (That ironically look like they belong in the original Guess Who). Their board of directors isn’t any better, including only one woman, who incidentally joined the board just this past May.

Looking at who makes up the decision-making team of LEGO, one immediate solution jumps to mind: More women. Sure, it might not solve all of their issues, but it would be a good start. We need more women in these types of positions…or we at least need more people in charge that will take a second to really think through some of these decisions.

Hm…maybe we can have the firefighter carry an ax or fire extinguisher instead of touching up her lipstick?

Why don’t we have half men and half women in the next edition of Guess Who? That will really throw them for a loop!

Let’s be the change we want to see. Let’s encourage our daughters and our sons to find their way into jobs that impact society for the better, so perhaps one day they’ll be the ones making these types of decisions and they’ll make better ones.