Name: Anne G. Sabo
Age: 39
Occupation: Writer and Educator
Location: Northfield, Minnesota, a small college town just south of the Twin Cities
Any other relevant tidbits you’d care to share: I grew up in Norway, recognized for its level of gender equality and support for sex education. I moved to the United States in 1995 to study for a year in Seattle, and ended up staying. 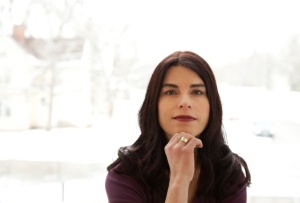 When did you first identify as a feminist?
Growing up in Norway, a Scandinavian country well known for the work done there to ensure women’s rights on a broad scale — from the right to abortion and comprehensive parental leave, to the right to equal job opportunities and pay — I took feminism for granted.

During my second year of elementary school, Gro Harlem Brundtland became Norway’s first female prime minister. She served three terms between 1981 and 1996 before taking on other prestigious positions for the World Health Organization and the United Nations. Trained a medical doctor, she also raised four children.

Girls my generation thought we, like our prime minister, could do and have it all. I grew up in gender neutral clothes, with a gender neutral haircut and gender neutral LEGOs. Eventually, we learned about the lack of women’s rights and gender equality in faraway places, like the third world and even closer by in the Mediterranean region and Eastern Europe. Then I moved in with my first serious boyfriend and I realized there was still plenty to be done in Norway too. While to a lesser extent than in the US, traditional gender roles still affect how young women and men navigate their relationships and divide domestic responsibilities. Upon realizing this, I became a feminist. I was 18 or 19 years old at that time.

Have you ever experienced resistance to identifying as a feminist? If so, why do you think that is and how do you handle it?
Abovementioned boyfriend and many of his friends reacted with disbelief and mockery against my feminist advocacy, which only served to solidify my feminist beliefs. In their opinion, feminism was something of the past. Clearly, it was not.

Surrounded by progressive friends, the topic was more or less moot during my years in graduate school at the University of Washington, Seattle.

I began experiencing resistance to feminism again while teaching college students in the Midwest for ten years. Several of my students were unwilling to accept the need for feminism. Some would even deny that we still had to fight for equal pay for equal work, and the right not to be sexually harassed and discriminated against sexually. I faced resistance in particular from conservative male students, but also from what I would label traditionalist female students, for lack of a better term. These were female students who were not opposed to attending college to attain the MRS degree, or worry less about their post-graduation careers than getting married and having children. This was very unsettling to me, but I never stopped advocating feminism; if anything, I became more concerned with the importance of teaching issues that pertain to gender and sexuality. Also sensing the need and desire among students for more comprehensive sexuality information, and having myself grown up in a country where substantial human sexuality education has been promoted for decades (Norway was a world pioneer in introducing human sexuality education in the public school system in the 1930s, and in the 1950s became the first country to mandate human sexuality education), I took on the unofficial role as sex educator for students who had all sorts of questions and insecurities when it came to human sexuality and intimacy. “Love, Sex, and Family in Nordic Film Today” was a course I developed and taught for a number of years with this in mind, using the popular medium of film to address cultural differences in attitudes toward sexuality.

What do you see as the future of feminism?
At least here in the US, I see working for more comprehensive, paid parental leave as one of the most pressing items on the agenda for feminism. With only 6 to 12 weeks of maternity leave, many new moms opt to sacrifice their careers to stay home with their children, and for good reasons too, breastfeeding being one of them. This pattern will continue to reinforce traditional gender roles to the detriment of women and men. Cut to Norway, where political groups are now lobbing for an even more equal division of the one-year parental leave between the parents, lest the women lag behind in the workforce in terms of promotion and retirement plans.

But the future of feminism holds more than an empowered motherhood and gender equal parenting as a viable option, and includes working for equal rights, respect, and opportunities for all groups of our population, regardless of gender- and sexual orientation, age or race.

4 thoughts on “This Is What A Feminist Looks Like: Anne”