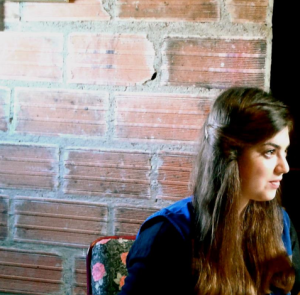 How do you define feminism?

At its core, feminism inherently asserts a sense of equality of the sexes- I shouldn’t be paid less than a man for the same job and I shouldn’t feel inadequate or limited in my potential as a person merely because I am a woman. But beyond lending insight into a woman’s role in the world, feminism is honoring yourself as a woman and knowing that regardless of society’s mixed messages, you are an empowered, strong, and poised beautiful person who deserves equal opportunity and equal treatment. By saying “I am a feminist,” I am constantly supported by my feminist framework while also continuing to explore my identity and sense of self.

When did you first identify as a feminist?

I began to identify as a feminist during my sophomore year of college. I started writing for Duke University’s feminist blog, Develle Dish, and through each piece of writing, I matured as a feminist and as a thinker. I stumbled upon the blog at the end of my freshmen year and I knew that I wanted to be a part of a community that provided women on campus with a safe place to vent their fears, their joys, and their experiences in a way that simultaneously comforts and challenges the notion of modern feminism.

Has your (definition of) feminism changed over time? How?

Even before taking Women’s Studies courses and reading the work of famous feminists, I clung to feminist ideals because they gave me more confidence in myself as a woman during a time of scrambling to figure out where and how I fit within the college context. Now, however, I see feminism as less of an ideology and more of a call to action, an impassioned response. Because I am a feminist, I have different perspectives on identity, politics, society, love, friendship, etc and all of these unique underpinnings tailor a generic rendering of “feminism” to accurately depict its role in my daily life.

Have you ever experienced resistance to identifying as a feminist? If so, why do you think that is and how do you handle it?

At my university, there is a lot of resistance to the idea of identifying as a feminist. Most people believe wholeheartedly in the idea of gender equality, but the danger lies in saying, “I am a feminist.” When I first began writing for Develle Dish, I was even nervous about how my pieces would be received by the campus community. It was the first time that I put myself and my personal views on sensitive topics out there for others to critique, celebrate, and discuss in a public forum, and as a result, I resisted calling myself a feminist until I felt more confident in expressing my views as a feminist blogger. Feminism is perceived as potentially threatening to one’s public image when the assumption is that feminists are a bunch of masculine, bra-burning man hating women. I try to challenge these harmful stigmas and write about how feminism is something that every woman should embrace and support through my writing for Develle Dish and for my own personal feminist blog, Collegiate Feminist. My goal is always to give young women on campus a voice, but not to speak on behalf of all Duke woman.

What do you see as the future of feminism?
I believe that the future of feminism is in the hands of vocal young women who have come of age in the midst of many mixed signals. We’re still debating whether or not women can have it all, juggling families and careers in a society that doesn’t provide sufficient support to powerful women in the workforce. We’re supposed to be proud of our feminine bodies, while society projects this image of beauty that’s defined by Photoshop and a perfection that profits from harping on our insecurities. Being a woman in the 21st century is a confusing and difficult path to navigate and feminism can be a source of clarity and strength. And yet I still believe that the future of feminism is not defining what it is, but rather what it does and how this notion of women’s empowerment functions in society to revolutionize and change the lives of both woman and all people. The future of feminism is dialogue, dialogue, and more dialogue through any and all social media platforms, the big and the small, uniting women from all corners of the world.
From Danielle’s blog, Collegiate Feminist: “At the beginning of my sophomore year, I began writing for Develle Dish, Duke’s feminist blog and I knew that I wanted to be a part of the feminist community at Duke. Writing articles, engaging in energizing discussions, and participating in the programming of events such as Feminist Week and Breaking Out 2012 (a gallery of rape and sexual assault victims speaking out about their experiences for support and healing) have all helped me explore the essential role of feminism in our lives as young women in the 21st century.” Follow Danielle on Twitter: @elleeenel

2 thoughts on “This Is What A Feminist Looks Like: Danielle”