The other day, a piece I wrote that reflected on a quote by actress Elizabeth Banks went up at Bitch magazine. Banks had been discussing motherhood with People magazine and was quoted saying,

“You don’t realize how easy one is until you have two. Now I’m really a mom. Oh, I am a mom now! This is for serious — I am responsible for two people now.”

As I mention in my post at Bitch, I don’t actually believe that Banks feels that mothers of only one child are not “real,” nor am I personally offended if she did happen to mean it. Instead, I took Banks’ words and used them to look at the larger issue of why language like that can be damaging when it comes to motherhood. Unfortunately, not everyone agreed with me and I was subjected to some pretty harsh comments (I know, I know. Never read the comments).

I’m not writing this post to complain about the negative comments I received, but instead to wonder why we can’t have a discussion about the language surrounding motherhood without claims of sensationalism. The purpose of my piece wasn’t to sensationalize anything or anyone, or even to “call out” Elizabeth Banks. The problem, as I noted, isn’t even Banks, but rather the fact that we have phrases like “real mom” or “good mom” in our vocabulary when reflecting on motherhood. I’ve written about this before – dads are certainly not scrutinized in the same judgmental fashion mothers are

I’ll admit it: I’m knee-deep in ripping apart the good mother myth at the moment. I’m currently in the editing phase for my anthology (book cover samples came in the other day!!), and I own up to wearing good-mother myth tinted glasses more often than not. I’m more tuned in to both the overt and more subtle ways society continues to push this myth of the “good mother” as the ideal.

But just imagine for a moment if we didn’t have “good mother” or “real mother” as parts of our language of motherhood. What else might fall to the wayside? Heated arguments about breastfeeding vs formula feeding? “Natural” vs. Intervention births? What else?

Imagine if we could take all that time that’s been used up by these debates and focus it on issues that really matter (oh, you know… mandatory paid family leave, paid sick leave, flexible work hours, continued access to safe & affordable contraception and abortion, perfecting that awesome cake in a jar recipe from Pinterest). A gal can dream, no? 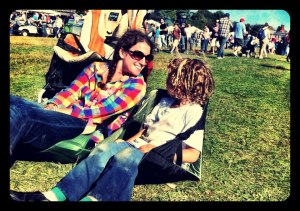 What would we talk about if our language around motherhood shifted?

8 thoughts on “The Language Of Motherhood”