Back in March, I hosted a guest post on the midwifery model of care from Sera Bonds, found of Circle of Health International. Since then, I’ve kept tabs on all the great, much needed work that COHI has been doing in the realm of maternal healthcare. They’re currently working towards financing a project that would help displaced women and children in Syria. Read on to learn more about the project and what you can do to help.

Mothers everywhere love their daughters and every culture values its children. Some cultures value their girls less than others. This equation can change during a crisis: a war, a devastated crop, a death of a husband and breadwinner. Everything, in those moments, can change for a family. Girls become a commodity: the cash crop, the way out of a war, the way to earn an income that was lost.

Syrian families in Jordan, like others facing war and displacement, are bartering their girls. Not all of them, of course, but some of them. One girl sold is a tragedy. Two or more and it becomes an economy. Casting judgement in such situations does not protect our girls, but action can.

There are so many mothers and families displaced from this two-year conflict that, for example, one of the Syrian refugee camps in Jordan is now one of the largest cities in Jordan. 80% of the world’s refugees are women and children, and girls in these settings are at increased risk of sexual coercion, trafficking, and rape.

Circle of Health International is working to address such systemic causes of early marriage, child slavery, and child soldiers. We recognize that girls and women are in danger of being sold, brokered, and traded by their families in times of war and crisis. And that one of the most effective ways to prevent this is to ensure that families have incomes, a safe place to live, and access to education. 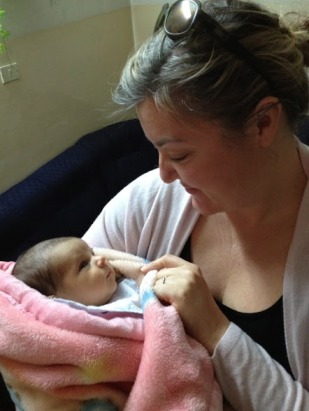 COHI is a US-based humanitarian organization helping mamas and babies in some of the world’s hardest places. We’ve worked in ten humanitarian emergencies and have reached over three million women. COHI is an organization of midwives, nurses, physicians, activists, public health professionals, and trauma specialists. We partner with local women’s groups, help to assess the women’s focused needs in an emergency, and then do what we can to fill in the gaps that are found – all according to our values of non-violence, grassroots community action, and putting mamas first.

Join COHI in providing healthcare for these families, as we create programs and partnerships addressing these root causes of child marriage, trafficking, and sexual coercion. One of the basic ways COHI can do this is by providing aid in emergencies that is distributed to women specifically. COHI is currently involved in a fundraising campaign targeting moms and their kids. We are trying to raise $50,000 to buy flour, cooking oil, and milk for the moms and kids under six years old in Syria. Hunger and a family’s inability to provide food for their family can result in the selling or early marriage of a young girl. Join COHI and take action, donate today.

For our girls, because they are all ours to protect.