Today is Yom HaShoah – Holocaust Remembrance Day. A day to take time and recall the atrocities of the past so that it does not repeat itself.

To be honest, I don’t think I can ever forget, growing up with grandparents who were Holocaust survivors. But I look to my son who doesn’t quite grasp the horror that occurred, and wonder if he’ll connect with it in the same way I did. 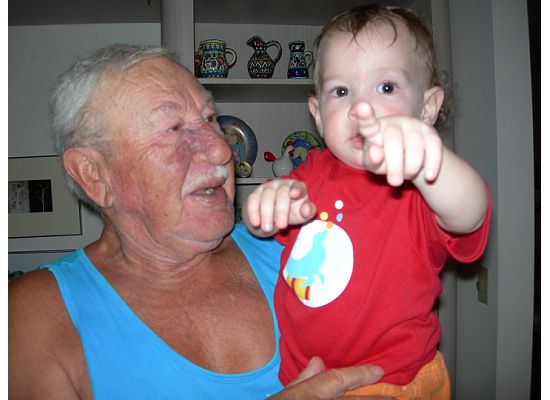 My grandfather (who passed away a few years ago) and my son. I’m glad he was able to meet him and spend a few years together.

Growing up, I just knew. It was hard not to when your grandfather had numbers inked into his skin and you were a curious kid who asked too many questions.

My grandfather’s family was rounded up from his hometown of Schaulen, Lithuania. His parents, brothers and sisters all taken to concentration camps. There he wasn’t known as Feiwa Sal, but rather #85705. He was shuttled between a handful of camps, unknown horrors occurring at each one before finally being liberated from Dachau. 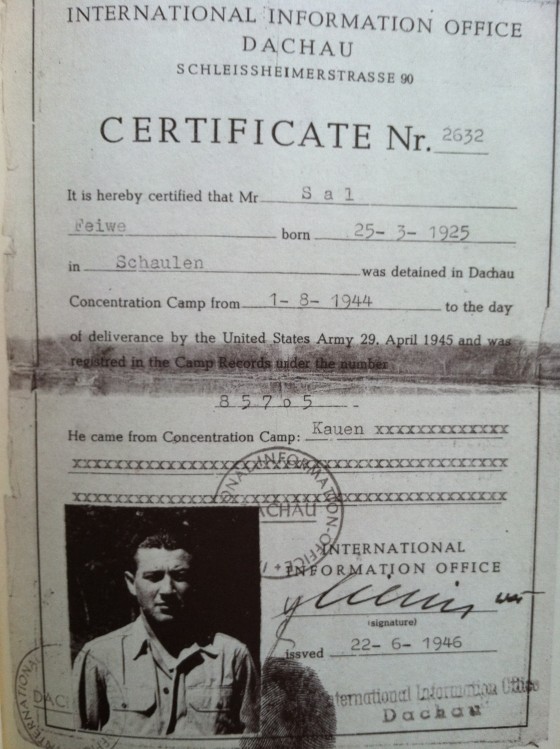 He was able to locate most of his family that he knew didn’t die, except for his two youngest brothers. To this day, nobody is sure whether they perished in the Holocaust or somehow made it out safely to an unknown fate… 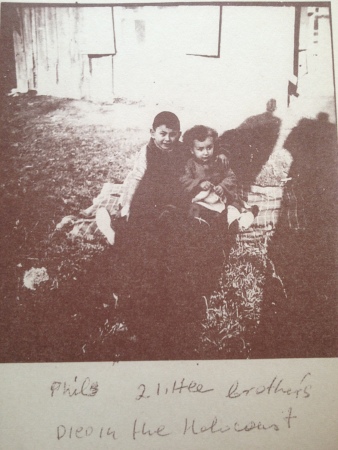 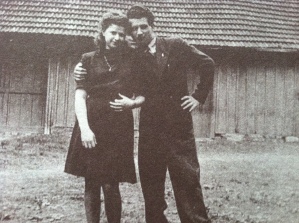 After he was liberated, he met my Bubby Esther in a displaced person’s camp in Germany. Her story of survival is its own unique one – one I hope to record someday soon. She lived underground in bunkers in the woods and in barns of righteous gentiles who hid her family. She doesn’t have numbers inked into her skin, but her memories are etched in her forever. How does one forget? 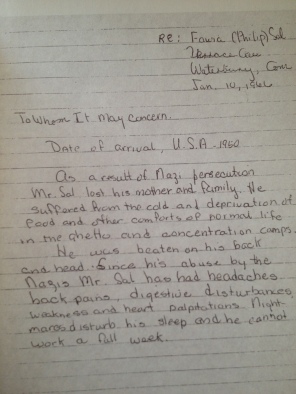 I grew up with these stories hardly talked about but still known. When I eventually learned about the Holocaust in school, I needed to know more, craved more information, but found that my grandparents didn’t want to talk about it all that much… understandable.

But we had documents, like pictures, and release papers and more, like this note my mother wrote in hopes of securing money to cover my grandfather’s medical care. She wrote this note for her parents when she was in high school.

So, I read all I could. But I needed, wanted to know more. When I was a senior in high school, I decided to take part in the March of the Living – a 2 week trip to Poland and Israel.

In 1998 I joined many other teens and adults as we traveled to Poland, taking in the country and the history.

We walked the reverse path, from the death camp of Auschwitz – which claimed 1.1 million lives – to the work camp of Birkenau, reversing the path of so many Jews before us. 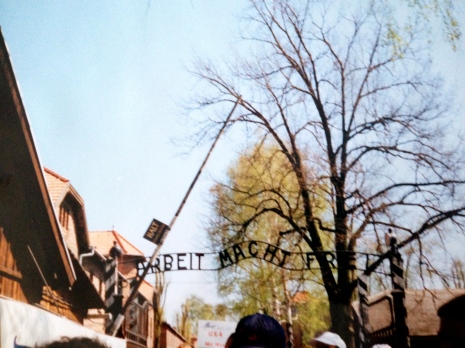 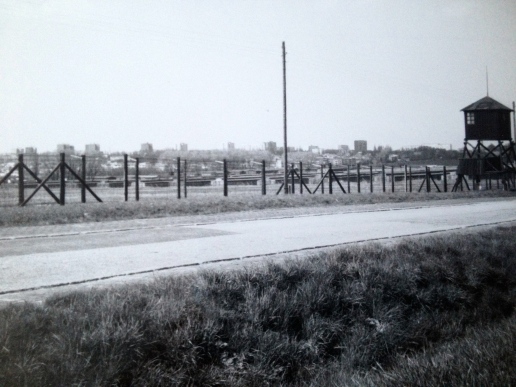 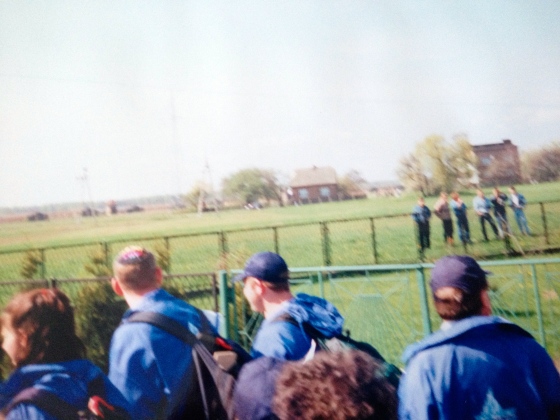 The local Polish people would watch as if we were some sort of macabre parade. I wondered what they were thinking…

We also visited a number of other former concentration camps. I can’t forget Treblinka. There’s no actual camp still remaining there. Just some memorials that were created. But the grass. It was the greenest grass I had ever seen in my life. Somebody pointed out that it looked so alive because it was fertilized with the dead.

Then there was Majdanek. This camp was on the outskirts of Lublin. When I say outskirts, I mean it was jutted up right against the city.

Majdanek barracks with the city in the background.

We learned that the people of Lublin would complain… they would complain that the laundry the put out to dry would get dirty from the soot the wind carried over from the camp. The soot caused by burning bodies. Did they know? What could they have done? 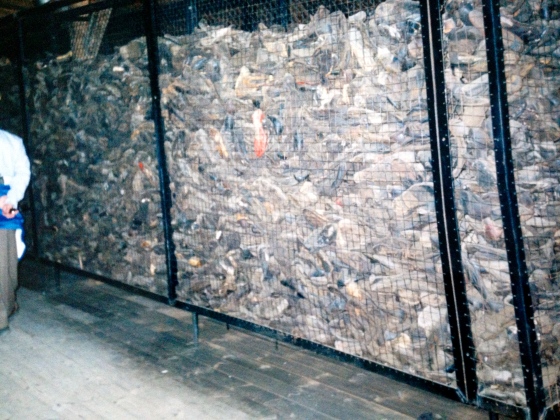 Shoes. So many shoes. Why did they keep them?

We walked through the gas chambers of Majdanek barefoot. I can’t remember why we were barefoot so many years later. Out of a sense of respect for those who walked before us, perhaps? 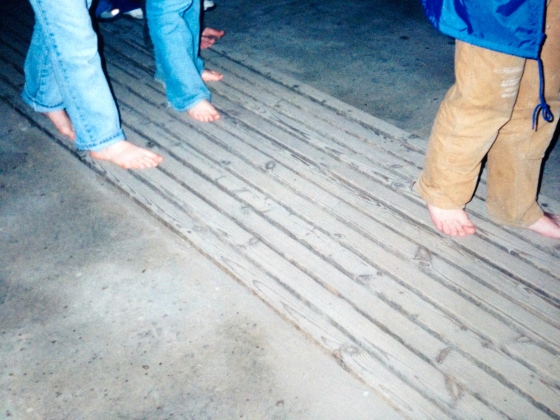 The thing about Majdanek is that since it was captured nearly intact, it’s just a few switches of electricity from being back up and full running. That terrifies me. It is also an in-your-face reminder that we should never forget.

I haven’t shared any of these pictures with my son yet. He has a vague idea of the Holocaust – in the way a 7-year-old can understand. As he gets older I’ll fill in the gaps and explain how our family factors in to this story. Like how his great-grandparents lived the stories he reads about in school. As he grows older, he won’t have the same ability as I did to ask questions of those who were there. Thankfully, many survivors are getting their stories down – recorded for posterity, so that we never forget.

*All historical pictures via my uncle Jack Sal and his book Re/Place. All other pictures are mine.