Name: Rebecca Bailey
Age: 41
Occupation: currently stay at home mom of twin toddlers
Location: Norwich, United Kingdom
Any other relevant tidbits you’d care to share: I’m originally from Brooklyn and moved away when I was 23 but have lived (as an adult) outside the US longer than in it. I’ve been to 10 countries, but there are lots more waiting for me to see. I’ve voted in every major election since I was 18. 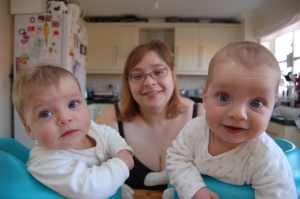 How do you define feminism?
Feminism is the idea of women being equal to men and having the ability to live their lives, work, or walk down the street as men are able to do without restrictions of fear, culture, religion and legal bias.
When did you first identify as a feminist?
I wasn’t even 11 years old when some old guy with grey hair smirked then licked his lips at me when I was on my way to school. At that moment I was angry, but when I told my teacher and she said ‘Oh thats how men are’ I was beyond furious. Why does he have the right to be gross to me? I didn’t know the word but I was a feminist at 10 1/2 years old.
It was reinforced when I went with a friend to have an abortion after her boyfriend dumped her when she told him she was pregnant. Walking to planned parenthood in Brooklyn with her on the verge of tears we were accosted by some very tall older guy telling us not to go in there. I yelled at him ‘do you have any adopted kids, no then shut the eff up and mind your own damned business’ this was in the eighties and the anti crowd weren’t as aggressive as they are now.
Has your (definition of) feminism changed over time? How?
When I was a teenager I was quite insulted by what seemed like a constant drone of ‘hola mamita’, ‘aye que chula’, or ‘ooh look at the tits on her’ or other nasty comments from older men to my younger self.  As I got older the ‘go along to get along’ mentality started creeping in. The occasional ‘You know I’m just kidding, right’ disclaimers after sexist jokes. I tried to laugh it off because I didn’t want to be singled out as an uptight killjoy.
The stupid blond jokes were almost tolerable in comparison to the ugly turn the discussions eventually took; because I’m Hispanic but don’t look or sound like the stereotypical Puerto Rican I’ve heard the most appalling racist statements usually in reference to all these “[insert Central or South American country here] women breeding like rats, taking our welfare money…blah blah blah.” The sentiment that de-humanizing women was somehow acceptable shook me, it pissed me off and made me redefine how I was going to view feminism.
Ironically I had taken a step back to get ahead. Since then I’ve gotten more informed and more despondent about the state of things for women in so many countries. I quit my last job because of the atmosphere. I was the only woman there for nearly the entire time I worked there. It was not pleasant. Honestly I didn’t handle it well, I just left. I’d probably have handled it very differently now, but I’m a different person because of the bullying. Today I’d have detailed notes and examples to take to court. Behaviour can be changed but it takes strong leadership and constant monitoring. More importantly the will to change the behaviour has to be there in the first place.
Have you ever experienced resistance to identifying as a feminist? If so, why do you think that is and how do you handle it?
I have a teenage daughter so when four of her friends were around I asked them if any one was a feminist. Only my girl said yes without hesitation. So I asked why no one else was and the response was “Feminists over-exaggerate things” I didn’t know whether to scream or cry! Instead I started small and asked about the pay gap. Is that an over exaggeration? “No.” The rates of sexual violence in the UK, exaggeration? “No.” And the pathetic conviction rates of sex offenders? “No.” What about women in other countries, like Saudi Arabia who are forbidden to drive, is that an exaggeration? “No.” So what is an exaggeration? “I dunno, they just exaggerate things” The resistance seems to be to the word feminism/feminist so I said “Would it be easier to be an equalist?” A resounding yes.
What do you see as the future of feminism?
The word ‘feminist’ has been co-opted by misogynists and bigots. Feminism needs a re-branding. It’s been too long since we’ve had an effective role model for girls. I’m not suggesting that there aren’t many amazing women doing extraordinary things everyday, my issue is with the lack of exposure to these fantastic woman. The internet has seriously changed the way information is distributed. Long gone are the days of trekking to the library spending hours skimming through encyclopedias and the annual updates, microfiche, or old magazines to get any useful information.
Twitter has completely expanded my view of the world. Feminists already utilize twitter, as I’m following lots of them. There needs to be more accountability from our politicians, fathers, brothers and sons, more importantly we need women to demand better for themselves and their daughters. It is almost an unspoken problem that there are too many women who don’t want to put their heads above the parapet. There is a Japanese saying ‘The nail that stands out will be pounded down’ that is how women have lived for millennia, the time has come to live the American saying ‘The squeaky wheel gets the grease.’

Bex Bailey was born in Brooklyn, NY and, despite spending nearly 20 years living in Japan, Germany and now the UK, she remains a definite Brooklynite. Her life experience includes: leading volunteer groups around the world, flight training for a private pilot’s license, running a traditional Japanese dance group which performed across Japan, and most recently a full time mother to twins. This has given her the opportunity to explore the diverse world of Twitter. An ardent and active pro-choice feminist, her frequent musings and retweetings can be found @bexbailey on twitter.

One thought on “This Is What A Feminist Looks Like: Rebecca”